The day-in-day-out goings on of electronic correspondence has become part of our lives. It’s a given and expected piece of the daily routine like brewing the morning coffee and checking out the news. We read and reply to email, text messages, manage tasks in calendars, and so on. Some of us still like to immerse themselves in the printed pages. I can still recall the guilty pleasure of pouring over a tabloid while waiting at the grocery store check-out line or writing a letter adding the stamp and dropping it in the mailbox.

But this is 2022 not 1982. In the twenty first century we depend on electronic exchanges, it keeps us connected like the newspaper and print magazines used to do.

Years ago, when I first begin losing my vision from retinal disease, I learned how to acquire the ability to hear text with artificial speech with a program called JAWS using a computer. I’ve since lost all my vision and have been using devices like a smart phone with voice over and can choose from a dozen accents from US English to South African.  My family tells me I listen to the rapid speech at such a level that it’s hard to understand it. I laugh and think, oh, I take pity on you light-dependent people. I speed-listen like the old   Evelyn Wood speed-reading advertisements on TV.

One day last week was an exception. A lapse of reliability, what I think of as “cyber gremlins”, struck and a week later, it still remains a problem. The origin of the barrier isn’t clear but the end result is the same: I cannot access a document Germain to my work. This means I either have to spend up to an hour of troubleshooting or give up and print it so I can scan and read it with another device.  This isn’t the frustrating thing, either – I am fortunate to have a back-up plan. The frustration appeared at the beginning; I could not click on the PDF attachment and read and reply like my peers. Because I am blind, the process of proficiency and fluidity in a task that should only take five minutes, for me, hasn’t even been accomplished.  I experienced this fairly often when I was employed, and it effected my overall productivity.

The overheard conversation would go like this: “Well why can’t she read it?”

“something about the document not being sent the way she needs it,”

“We did that yesterday, it didn’t help,”

“Maybe she needs more training with her software?”

“She says that’s not the problem, the problem is how the document was formatted,”

“What does she mean by that?”

“I don’t know, something about text and no pictures or something like that,”

“Go back and ask her if we can print it out instead,”

“Okay but you do know she won’t be able to read it,”

“Have someone read it to her, then,”

Going back to the PDF, I’d like to be the first person to respond and not the last one because I had to undergo assistive technology calisthenics in order to attempt reading it. At times like this, I think I’ve traveled to an alternate reality; having to ask for help and educate the sender of the document is my burden and there isn’t even one glimmer of hope in the vacuum of space.

It is a bit unsettling to know the world is set upon a highly visually-driven stage and if you can’t see, it is inevitable one will miss out on what drives the masses.   Sure we have increased the intelligence and proficiency of assistive technology and tools like improvements of computer software and hardware, audio description in the movie theater, streaming services and on major television networks; people with print disabilities have even made a significant contribution in the audio book industry, which is experiencing exponential growth.

, but the reality is it will take many more years, sweat equity and advocacy dollars to mind the accessibility gap for people who are blind and continue closing it. Changing attitudes is slow. People who can see don’t think about people who cannot. It may be, to some, a gross generalization but to someone like me, it’s a reality.

I state all this to sum up the personal experience: I was the only one in a committee who could not respond to a document sent to the group because I could not read it visually. This is why I ranted and now it’s over and I just feel sad, let down and a little guilty I even had to ask for an accommodation in the first place.

I wonder if these folks assume someone like me either couldn’t or worse, wouldn’t be able to manage civic responsibilities and therefore the documents didn’t need to be formatted responsibly?

Five years ago I stepped down from a local board of directors because despite asking for accessible documents, I received excuses instead. When I mentioned the ADA and that I felt discriminated against, I was suddenly treated differently and I left because of feeling like the accommodations were somehow a burden to those who had to make them.

I know life isn’t fair, I know we all struggle with issues based upon our lives, health, relationships, and finances or employment status, racial or gender biases, and so on. I would like the accommodation process to be better, to be more fluid, part   of the norm. If you are reding this and would like to build upon your knowledge of accessibility for people with print disabilities, drop a question like, “how do I make a blind-friendly adobe document?” in the search engine of your choice and you will be rewarded with a plethora of resources.  Your efforts won’t cure the world of the ongoing accessibility gaps but it could help someone else be able to access a document and be the first person to respond to a group email and not be left behind. 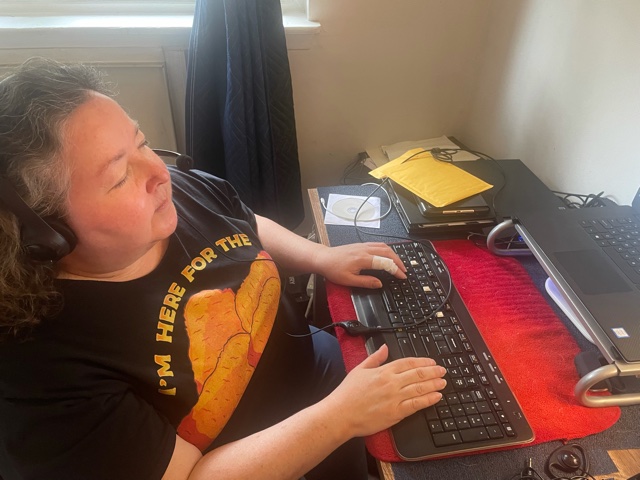 Annie and her office and equipment.