Here’s a halfway rhetorical question: what are weekends for? Since I don’t mow the grass, it could be anything. Scrubbing out the tub, maybe? Or, cleaning the shower with a toothbrush? Nope, guess again.

Hopefully some of you readers got it right: cleaning out my desk and file cabinet. Do I hear horrified screams and moans of dismay? BWAHHaHaHa!

First, a disclaimer: I am blind and do not like the task mostly because I require a set of eyes, usually my intrepid and reluctant hubby, Jerry. I avoid it and let it pile up, which is counterproductive. Okay, so then there are the extra tools, a braille labeler, scissors for trimming the labels, paper clips, stapler, accordion folders and four feet, er, inches of unfiled paperwork. Now, this is where I panic, and Jerry pulls up a chair and begins reading.

It really wasn’t that bad, except for when the accordion folder fell on its side and the paperwork that I had already filed, all slipped out into a messy pile and we had to start over. I lost page one of a five-page eye report and misplaced Bailey’s new vaccination record and Jerry found it in the trash pile. I still don’t know how that happened.

Eventually we finished and Jerry shredded to his heart’s content. It’s therapy for him, bless his soul. 😊And, that, dear readers, is how we overcame the insidious demigod of reams. 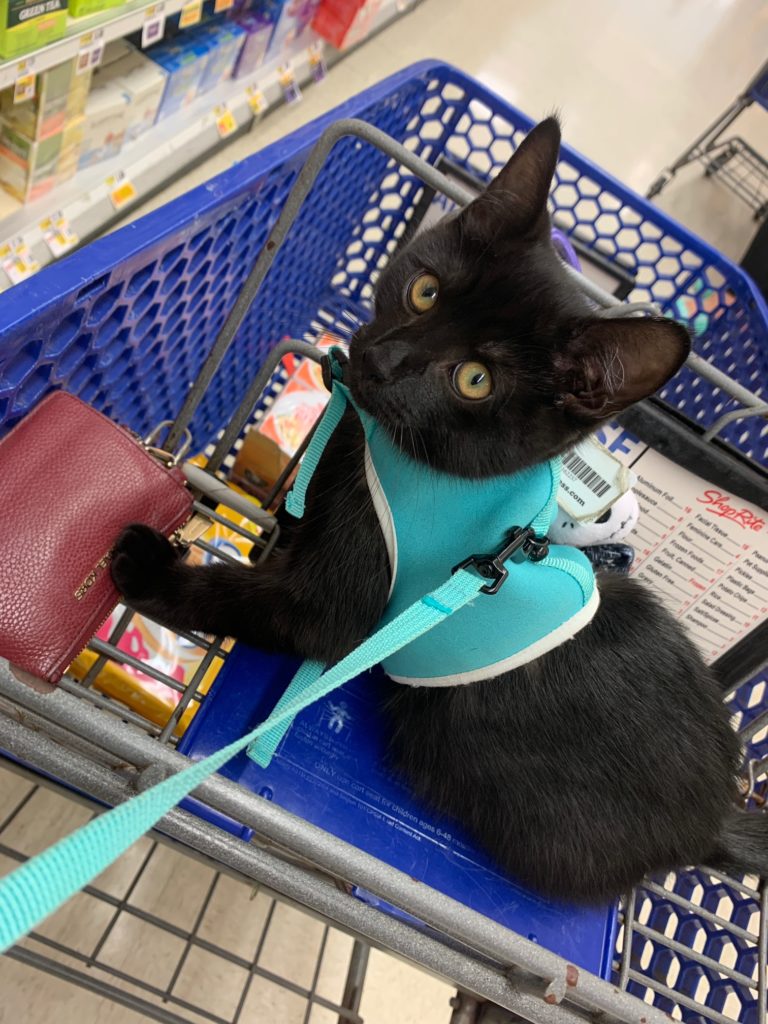 Noodle the kitten is developing into a well socialized domesticated feline. April, our daughter, took the time finding just the right kitten. He is mellow, confident, and is advancing in his training. The photos show Noodle in a harness and leash and sitting in a grocery cart. Before anyone cries out that this is not a service animal, allow me to say it was a quick and necessary exposure for him and he passed with flying colors, taking it all in and staying in place.

Noodle rides in the car in his harness, walks willingly into a cat carrier, (most of the time, lol) and has no fear of our dogs. Why is Noodle being trained like this? Our goal is to provide him with experiences so if one day he accompanies April on a plane or train, or when she moves or Noodle has to stay with us for some reason, Noodle will be calm and unstressed. He even is being trained to play fetch and is walking on his leash. Let’s say he is the kind of cat who might believe he belongs with dogs.

May dog is his cuddle buddy and Bailey has learned to tolerate Noodle and not play bow and bark at him. As for Papa, he is still giving the kitten the feline stink eye but lets the kitten eat from his bowl and get close without becoming evil kitty. The difference between Noodle and Papa is that Papa was traumatized as a kitten and Noodle wasn’t. This allows him to be more open to new and unusual experiences.
What’s the saying? Cats rule and dogs drool? 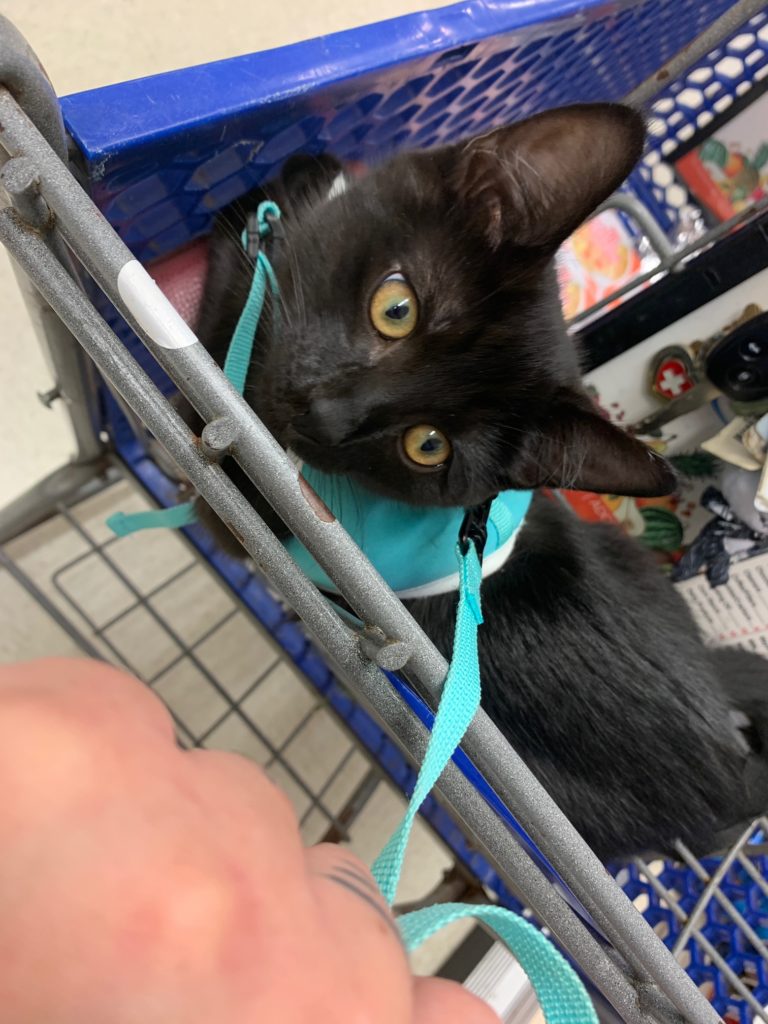 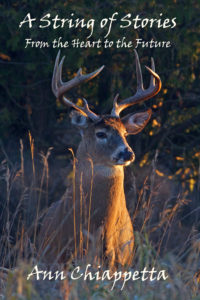 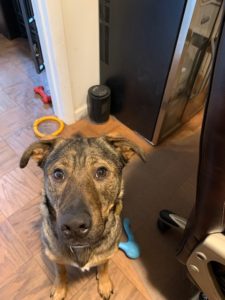 My office opens into the living room. I hear much of what happens from my position, including when things are not what they seem. Today, unbeknownst to me, may decided to investigate the empty box on the couch. I was oblivious, typing away at some project or another. I heard bubble wrap popping sounds, then May hauling ass into the metal crate. Hmm, I thought, I wonder what mischief she’s gotten into now? I got up and grabbed the I.D. cane and used it to sweep around and found the errant bubble wrap. When I picked it up it was wet with dog slobber and had holes in it. I started laughing, picturing May trying to chew it and getting quite a surprise, hence the popping sounds and her jumping into the crate like she got a bit of a shock. Silly dog! 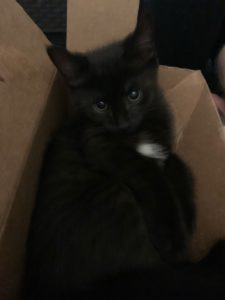 Sometimes one of the dogs does something that is funny and openly undignified., at least that is how we humans view it. We love them for living in the moment and finding opportunity to fulfill their doggy drive for affection, comfort, and sustenance. Below is a photo of yellow lab Bailey foregoing his training, and his timing is perfect.
PD: Bailey sitting on the bed behind Annie, who is also sitting on the bed eating a yogurt. Bailey’s head is on her shoulder, staring fixedly at the yogurt. 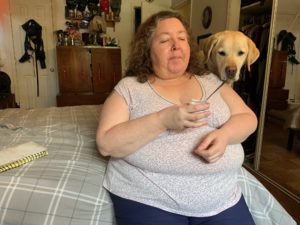 “I’m missing a lollipop,” says Jerry.
“Look in May’s crate for it,”
A minute later, Jerry returns with the as yet uneaten candy, still in the wrapper.
“She hid it under the towel in her crate,”
Saving it for later, I guess.

Tears for a Warrior
By Ann Chiappetta

I am thinking of my friend today
Caught in the viral war,
Being forced to use the last vestiges of strength
To find safe haven in this epidemic.
Where no safety is found.

This person, this friend, this man
With AIDS, who has defied all expectations during
Another epidemic
has survived
And I wonder, with sorrowful thoughts
If he will defy Corona like He did HIV.

This man, this person, this patient
Is surviving with minimal care,
Enforced clinical Neglect cut off
from us, suffering
Wracked with fever, lumbar pain, and mobility loss
Brought upon by quarantine.

Twenty-five years ago, he faced death and came back
I will find him in the places between dreams,
Make conversation on the astral plain
This is all I can do, dream and hope
my friend Will hear me.

I was selected as this week’s featured member of the Nonfiction Authors Association. Check out my interview here:
https://tinyurl.com/vm3u5v4