Escaping with his life

An inspiring and thrilling account of Leslie Young, a British commando who was captured and escaped from a prison camp in Northern Italy.

From the book jacket:  Very few British soldiers could lay claim to such a full war as Leslie Young. Having survived the retreat to and evacuation from Dunkirk, he volunteered for the newly formed Commandos and took part in their first operation, the raid on the Lofoten Islands. He fought and was captured in Tunisia. He went on the run before his POW camp at Fontanellato was taken over by the Nazis after the September 1943 Italian armistice. He spent six months on the run in the Apennine mountains aided by brave and selfless Italians. Many of whom were actively fighting their occupiers. He eventually reached Allied lines but not before several of his companions were tragically killed by both German and American fire.

On return to England he immediately signed up for the invasion of Northwest Europe and despite being wounded eventually fought through to Germany.

This biography epitomizes service and dedication during the darkest moments of twentieth century history, World War II.   It also shows the reader the human side of war, the resiliency of the human spirit and the British stiff upper lip, the grit of a soldier.

The book takes the reader on a journey filled with   action and heartbreak as told in part by Young’s journal entries and his son’s descriptive and historically accurate narrative.

At times this reader felt as if the history lesson textbook was on the desk and the words blurred into a dry and drawn—out round of this-followed-that narrative. But this was the only drawback to this intriguing story.

The attempts of the author to enliven the story is sprinkled with pieces of   the ingenuity of the time, like the bicycle brigade, for example.   There is also depictions of the depredations of war upon humans, the land itself, and the civilians who struggle to survive the Nazi occupation.

The book opens with a touching and powerful poem written by an Italian poet, Pierre Luigi Felli. The poem is haunting and sets the book’s place historically as well as creatively. Felli’s last line, alludes to returning to the haunting places, “Years later, the return along those mountain pathways feeling the scent of memory.”

This reader was satisfied and pleased Sir Nicholas’s account is fascinating and honors his father’s journey and those  who fought for freedom from tyranny.

The last Monday of May commemorates Memorial Day, the time to gather ourselves and remember the sacrifices made by our Nation’s soldiers who died protecting our country. It has always been a reflective and poignant holiday for me; my father served in Korea, my uncles and cousins in World War II, Vietnam, and my husband in the assorted international conflicts in the Middle East during the 1980s and1990s. During my time as a trauma therapist working with veterans, I heard the firsthand accounts of the demands and sacrifices our men and women in the armed forces made   and continue to make for us each and every day.

Originally called Decoration Day, the actual day set aside to fly flags at half-mast, participate in parades, and enjoy the launch of the summer season was May 30th.

It was referred to as Decoration Day because it was chosen as the best time by many families to brush off the ides of winter and decorate the soldiers’ graves. Memorial Day was officially declared a National Holiday   by President Lynden Johnson on May 1966 at Arlington National Cemetery.

A memorial written by Civil War-era orator, Robert Green Ingersoll, eloquently captures the significance of Memorial Day for all generations of our Fallen:

They sleep in the land they made free, under the flag they rendered stainless … Earth may run red with other wars, but they are at peace.

In the midst of battles, in the roar of conflict, they found the serenity of death.”

Below is a link with additional information about the history behind Memorial Day. http://www.usmemorialday.org/backgrnd.html

Thanks to fellow editor and writer, Ernest Dempsey, I am sharing my first book review. I am so excited to be one of the many talented writers who benefits from and contributes to the Recovering the Self blog and content. Check it out:
https://www.bookcorner.us/more-than-a-memory-reflections-of-viet-nam/.

This was my first workshop in, like, forever. I decided to take part in it because I felt I needed a creative challenge. I felt my story as the wife of a Navy veteran was, an as yet untapped source of creative material. I was also lucky the group met on a day when my shift at the counseling center ended early. Sure, it was a long day for me and for my guide dog, but we were both ready to meet the task with excited anticipation.

Our instructor, Julia, was the best, knowledgeable, kind and direct. The writing exercises she gave us got me writing and accessing creative content I’d either never thought was worth expanding or too emotional. I loved hearing the writing of the other three women, too; we were all so different, our experiences with veterans, while different, also kept us connected. We wrote our hearts out and I want to thank them all for each contributing to making the group a safe and empathetic place to share our feelings through writing.

Below is one of my pieces included in the anthology.

The soldier’s stance keeps him in good posture, shoulders straight, ready for action. Confidence and training come through during target practice; his body moves expertly, and he takes aim. He will serve and protect, honor his uniform and endure.

People have remarked he has a “hard stare”, often called “his stink eye,”. It is intimidating. He doesn’t miss much, green eyes scanning surroundings, sizing up others around us. Authority is hard for him to put down, it sticks to him like static-charged cellophane. He chews gum with an air of purpose, as if the goal is to get every bit of chew before discarding it.

Yet, at times, his voice sounds like an adolescent. It’s quiet, New York, and doesn’t carry far. when I hear him talk to a child or to our dogs, the tone takes on a kindness, I hear the smile in it. Strong hands that compel a violent person into handcuffs have also held a hamster, comforting the small animal as it died.

We were married in an inter-faith ceremony which took place in a reception hall. His voice quivered as he said his vows. When we danced the first dance, he whispered,
“I don’t know how to waltz,”

Three other pieces of my writing are also in the book, Thoughts on The Storm, a narrative on the first Gulf War; The Joining, a personification essay on the harness used on a guide dog, and a poem, The Cabin, about the cabin of my youth. These pieces, along with writing from the wife of a Vietnam veteran, the sister of a Vietnam veteran, and the daughter of a WWII veteran fill this book with emotional and meaningful stories.
If you want to learn more about the VWW program and purchase copies, go here:
https://fvww.weebly.com/buy-books.html

On the Homefront: Volume 4, published June 2019, contains narratives of homes lost and homes returned to, wars played out on television, wives and mothers anxiously awaiting news about their loved ones, and what it’s like when that loved one doesn’t come home. Told from a vantage most of us never have – loving someone who is literally in the line of fire – these stories are ours; mothers, daughters, sisters and wives, loving their families and holding on. Authors: Barbara Carlson, Ann Chiappetta, Roseli D’Alessandro and Susan Perko.

Veterans Writing Workshop works to establish writing programs for the veterans’ community in Westchester County and the New York Metropolitan area. It was created as an outgrowth of a successful veterans’ writing program hosted by Fordham-Westchester University in Spring of 2010 as part of the National Endowment for the Arts’ the Big Read program. VWW consists of two major components: veterans’ community-based writing workshops held in a public space free of charge to all U.S. veterans and their family members. 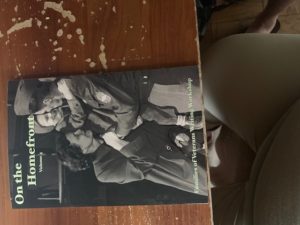