On October 15 disability advocates gathered for our County’s REV UP campaign. I am pleased to share the following link featured on 10/15/19 on News 12 Westchester.
https://tinyurl.com/yy3waa76
The REV UP WESTCHESTER Voting initiative was well attended; our chapter of the American Council of the Blind of New York participated along with other agencies and groups supporting the disability-voting bloc. Westchester Disabled on the Move’s President, Maria Samuels and Laura Case, WDOMI’s systems advocate were successful in bringing together people with disabilities who want to be heard and share the right to vote independently and privately. The League of Women Voters, Disability Rights Advocates, Westchester Independent Living Center and other advocacy organizations participated in a voting information panel and ballot marking devices were available for ballot testing in anticipation of the advanced voting dates upcoming starting October 26 in Westchester County. 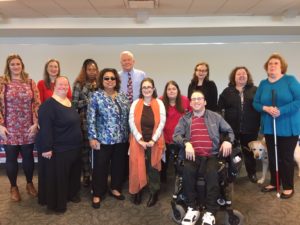 Grant Awarded to Blindness Advocates and Their Guide Dogs

October 2019, New Rochelle, New York – Guide Dog Users of the Empire State (GDUES) received a $1000 grant from the philanthropic supporter Mission Box. The grant was awarded based on a short poem, called a haiku.
“Canine eyes to guide
Trust, Autonomy and pride
Together we go “

Founded in 2016, GDUES is a special interest chapter of the American Council of the Blind of New York and strives to advocate and support guide dog users living in New York State.

President Ann Chiappetta says, “We are thrilled to be a Mission Box Recipient. This is our first grant and we will be able to use it to fund programs to increase the general public’s awareness about guide dog teams and interacting with guide dogs when out in public, in businesses, and in schools,”
To learn more about GDUES: www.gdues.org
To learn more about Mission Box: www.missionbox.com

To learn more about The American Council of the Blind of New York: www.acbny.info

Being a guide dog handler is probably the best choice I’ve made since going blind. It gives me much more than just a canine partner and increased safety. Sometimes it even brings comic relief.

A few months ago, I left work and walked around the corner to relieve my guide dog, Bailey. We began the usual routine, and then he started to do something odd, he lay down. I bent to try to make sure he wasn’t eating anything, and, being a Labrador, he sure was munching on something. I pulled him away and made him spit it out but he’d already swallowed it. I needed to know what was all over the sidewalk, so I got out my phone and called AIRA. The agent identified the scattered items through the camera on my mobile phone as French fries, to my relief. If Bailey was going to be corrected for temptation, I needed to know what had done the tempting. The agent’s quick and accurate scan of the area confirmed it was something that would not cause Bailey any harm. This helped me breathe a sigh of relief; it was only a few French fries. We could deal with it.

This is also a reminder that while Bailey has an advanced canine degree as a guide dog, he is still a dog and will give into temptation. The counterbalance to this is knowing that when he does his job, when he pulls us from a driver turning right on red as we try to cross a street, or when he shoves me away from the speeding bicyclist hurtling down the sidewalk, a few French fries is acceptable.